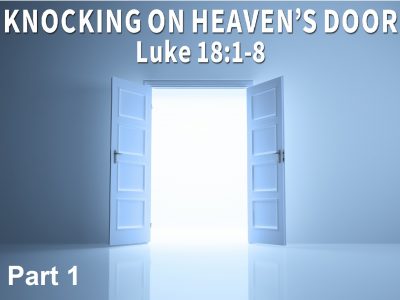 1 And he told them a parable to the effect that they ought always to pray and not lose heart. 2 He said, “In a certain city there was a judge who neither feared God nor respected man. 3 And there was a widow in that city who kept coming to him and saying, ‘Give me justice against my adversary.’ 4 For a while he refused, but afterward he said to himself, ‘Though I neither fear God nor respect man, 5 yet because this widow keeps bothering me, I will give her justice, so that she will not beat me down by her continual coming.’ ” 6 And the Lord said, “Hear what the unrighteous judge says. 7 And will not God give justice to his elect, who cry to him day and night? Will he delay long over them? 8 I tell you, he will give justice to them speedily. Nevertheless, when the Son of Man comes, will he find faith on earth?”