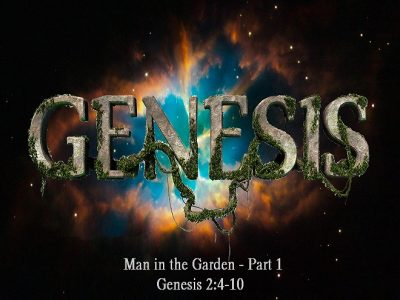 4 These are the generations of the heavens and the earth when they were created, in the day that the Lord God made the earth and the heavens.

5 When no bush of the field was yet in the land and no small plant of the field had yet sprung up—for the Lord God had not caused it to rain on the land, and there was no man to work the ground, 6 and a mist was going up from the land and was watering the whole face of the ground— 7 then the Lord God formed the man of dust from the ground and breathed into his nostrils the breath of life, and the man became a living creature. 8 And the Lord God planted a garden in Eden, in the east, and there he put the man whom he had formed. 9 And out of the ground the Lord God made to spring up every tree that is pleasant to the sight and good for food. The tree of life was in the midst of the garden, and the tree of the knowledge of good and evil.

10 A river flowed out of Eden to water the garden, and there it divided and became four rivers.