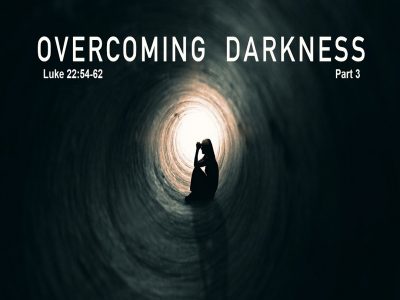 54 Then they seized him and led him away, bringing him into the high priest’s house, and Peter was following at a distance. 55 And when they had kindled a fire in the middle of the courtyard and sat down together, Peter sat down among them. 56 Then a servant girl, seeing him as he sat in the light and looking closely at him, said, “This man also was with him.” 57 But he denied it, saying, “Woman, I do not know him.” 58 And a little later someone else saw him and said, “You also are one of them.” But Peter said, “Man, I am not.” 59 And after an interval of about an hour still another insisted, saying, “Certainly this man also was with him, for he too is a Galilean.” 60 But Peter said, “Man, I do not know what you are talking about.” And immediately, while he was still speaking, the rooster crowed. 61 And the Lord turned and looked at Peter. And Peter remembered the saying of the Lord, how he had said to him, “Before the rooster crows today, you will deny me three times.” 62 And he went out and wept bitterly.

Hebrews 11:6
6 And without faith it is impossible to please him, for whoever would draw near to God must believe that he exists and that he rewards those who seek him.

John 12:46
46 I have come into the world as light, so that whoever believes in me may not remain in darkness.

John 3:16-17
16 “For God so loved the world, that he gave his only Son, that whoever believes in him should not perish but have eternal life. 17 For God did not send his Son into the world to condemn the world, but in order that the world might be saved through him.

1 Corinthians 10:12-13
12 Therefore let anyone who thinks that he stands take heed lest he fall. 13 No temptation has overtaken you that is not common to man. God is faithful, and he will not let you be tempted beyond your ability, but with the temptation he will also provide the way of escape, that you may be able to endure it.

1 Peter 5:8
8 Be sober-minded; be watchful. Your adversary the devil prowls around like a roaring lion, seeking someone to devour.

John 10:10
10 The thief comes only to steal and kill and destroy. I came that they may have life and have it abundantly.

2 Corinthians 12:9-10
9 But he said to me, “My grace is sufficient for you, for my power is made perfect in weakness.” Therefore I will boast all the more gladly of my weaknesses, so that the power of Christ may rest upon me. 10 For the sake of Christ, then, I am content with weaknesses, insults, hardships, persecutions, and calamities. For when I am weak, then I am strong.

Luke 23:34
34 And Jesus said, “Father, forgive them, for they know not what they do.” And they cast lots to divide his garments.

Romans 8:1
1 There is therefore now no condemnation for those who are in Christ Jesus.