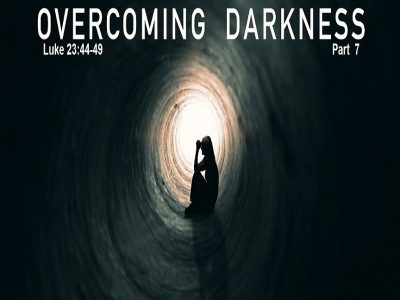 44 It was now about the sixth hour, and there was darkness over the whole land until the ninth hour, 45 while the sun’s light failed. And the curtain of the temple was torn in two. 46 Then Jesus, calling out with a loud voice, said, “Father, into your hands I commit my spirit!” And having said this he breathed his last. 47 Now when the centurion saw what had taken place, he praised God, saying, “Certainly this man was innocent!” 48 And all the crowds that had assembled for this spectacle, when they saw what had taken place, returned home beating their breasts. 49 And all his acquaintances and the women who had followed him from Galilee stood at a distance watching these things.

Luke 22:53
53 When I was with you day after day in the temple, you did not lay hands on me. But this is your hour, and the power of darkness.”

John 8:12
12 Again Jesus spoke to them, saying, “I am the light of the world. Whoever follows me will not walk in darkness, but will have the light of life.”

Matthew 27:45-55
45 Now from the sixth hour there was darkness over all the land until the ninth hour. 46 And about the ninth hour Jesus cried out with a loud voice, saying, “Eli, Eli, lema sabachthani?” that is, “My God, my God, why have you forsaken me?” 47 And some of the bystanders, hearing it, said, “This man is calling Elijah.” 48 And one of them at once ran and took a sponge, filled it with sour wine, and put it on a reed and gave it to him to drink. 49 But the others said, “Wait, let us see whether Elijah will come to save him.” 50 And Jesus cried out again with a loud voice and yielded up his spirit.
51 And behold, the curtain of the temple was torn in two, from top to bottom. And the earth shook, and the rocks were split. 52 The tombs also were opened. And many bodies of the saints who had fallen asleep were raised, 53 and coming out of the tombs after his resurrection they went into the holy city and appeared to many. 54 When the centurion and those who were with him, keeping watch over Jesus, saw the earthquake and what took place, they were filled with awe and said, “Truly this was the Son of God!”
55 There were also many women there, looking on from a distance, who had followed Jesus from Galilee, ministering to him, 56 among whom were Mary Magdalene and Mary the mother of James and Joseph and the mother of the sons of Zebedee.

Romans 6:23
23 For the wages of sin is death, but the free gift of God is eternal life in Christ Jesus our Lord.

Hebrews 10:19-22
19 Therefore, brothers, since we have confidence to enter the holy places by the blood of Jesus, 20 by the new and living way that he opened for us through the curtain, that is, through his flesh, 21 and since we have a great priest over the house of God, 22 let us draw near with a true heart in full assurance of faith, with our hearts sprinkled clean from an evil conscience and our bodies washed with pure water.

John 19:30
30 When Jesus had received the sour wine, he said, “It is finished,” and he bowed his head and gave up his spirit.

Luke 23:42-43
41 And we indeed justly, for we are receiving the due reward of our deeds; but this man has done nothing wrong.” 42 And he said, “Jesus, remember me when you come into your kingdom.” 43 And he said to him, “Truly, I say to you, today you will be with me in paradise.”

Luke 23:34
34 And Jesus said, “Father, forgive them, for they know not what they do.” And they cast lots to divide his garments.

Mark 15:39
39 And when the centurion, who stood facing him, saw that in this way he breathed his last, he said, “Truly this man was the Son of God!”