Run for the Crown 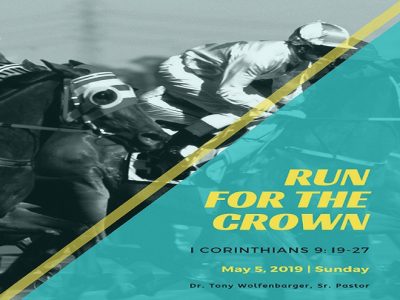 Philippians 2:5-8
5 Have this mind among yourselves, which is yours in Christ Jesus, 6 who, though he was in the form of God, did not count equality with God a thing to be grasped, 7 but emptied himself, by taking the form of a servant, being born in the likeness of men. 8 And being found in human form, he humbled himself by becoming obedient to the point of death, even death on a cross.

Matthew 1:21
21 She will bear a son, and you shall call his name Jesus, for he will save his people from their sins.”

Matthew 8:28-34
28 When Jesus arrived at the other side of the lake in the area of the Gadarene people, two men who had demons in them met him. These men lived in the burial caves and were so dangerous that people could not use the road by those caves. 29 They shouted, “What do you want with us, Son of God? Did you come here to torture us before the right time?”
30 Near that place there was a large herd of pigs feeding. 31 The demons begged Jesus, “If you make us leave these men, please send us into that herd of pigs.”
32 Jesus said to them, “Go!” So the demons left the men and went into the pigs. Then the whole herd rushed down the hill into the lake and were drowned. 33 The herdsmen ran away and went into town, where they told about all of this and what had happened to the men who had demons. 34 Then the whole town went out to see Jesus. When they saw him, they begged him to leave their area.

Matthew 1:21
8 but God shows his love for us in that while we were still sinners, Christ died for us.