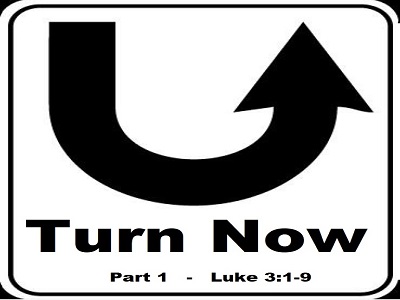 1 In the fifteenth year of the reign of Tiberius Caesar, Pontius Pilate being governor of Judea, and Herod being tetrarch of Galilee, and his brother Philip tetrarch of the region of Ituraea and Trachonitis, and Lysanias tetrarch of Abilene, 2 during the high priesthood of Annas and Caiaphas, the word of God came to John the son of Zechariah in the wilderness. 3 And he went into all the region around the Jordan, proclaiming a baptism of repentance for the forgiveness of sins. 4 As it is written in the book of the words of Isaiah the prophet, “The voice of one crying in the wilderness: ‘Prepare the way of the Lord, make his paths straight. 5 Every valley shall be filled, and every mountain and hill shall be made low, and the crooked shall become straight, and the rough places shall become level ways, 6 and all flesh shall see the salvation of God.’ ” 7 He said therefore to the crowds that came out to be baptized by him, “You brood of vipers! Who warned you to flee from the wrath to come? 8 Bear fruits in keeping with repentance. And do not begin to say to yourselves, ‘We have Abraham as our father.’ For I tell you, God is able from these stones to raise up children for Abraham. 9 Even now the axe is laid to the root of the trees. Every tree therefore that does not bear good fruit is cut down and thrown into the fire.”

John 18:13-14
13 First they led him to Annas, for he was the father-in-law of Caiaphas, who was high priest that year. 14 It was Caiaphas who had advised the Jews that it would be expedient that one man should die for the people.

John 18:24
24 Annas then sent him bound to Caiaphas the high priest.

Luke 1:15-17
15 for he will be great before the Lord. And he must not drink wine or strong drink, and he will be filled with the Holy Spirit, even from his mother’s womb. 16 And he will turn many of the children of Israel to the Lord their God, 17 and he will go before him in the spirit and power of Elijah, to turn the hearts of the fathers to the children, and the disobedient to the wisdom of the just, to make ready for the Lord a people prepared.”

James 2:19
19 You believe that God is one; you do well. Even the demons believe—and shudder!

Isaiah 6:5
5 And I said: “Woe is me! For I am lost; for I am a man of unclean lips, and I dwell in the midst of a people of unclean lips; for my eyes have seen the King, the Lord of hosts!”

Isaiah 40:3-5
3 A voice cries: “In the wilderness prepare the way of the Lord; make straight in the desert a highway for our God.            4 Every valley shall be lifted up, and every mountain and hill be made low; the uneven ground shall become level, and the rough places a plain. 5 And the glory of the Lord shall be revealed, and all flesh shall see it together, for the mouth of the Lord has spoken.”

Revelation 7:9-10
9 After this I looked, and behold, a great multitude that no one could number, from every nation, from all tribes and peoples and languages, standing before the throne and before the Lamb, clothed in white robes, with palm branches in their hands, 10 and crying out with a loud voice, “Salvation belongs to our God who sits on the throne, and to the Lamb!”

Luke 2:30-32
30 for my eyes have seen your salvation 31 that you have prepared in the presence of all peoples, 32 a light for revelation to the Gentiles, and for glory to your people Israel.”

Acts 28:28
28 Therefore let it be known to you that this salvation of God has been sent to the Gentiles; they will listen.”

Acts 19:1-6
1 And it happened that while Apollos was at Corinth, Paul passed through the inland country and came to Ephesus. There he found some disciples. 2 And he said to them, “Did you receive the Holy Spirit when you believed?” And they said, “No, we have not even heard that there is a Holy Spirit.” 3 And he said, “Into what then were you baptized?” They said, “Into John’s baptism.” 4 And Paul said, “John baptized with the baptism of repentance, telling the people to believe in the one who was to come after him, that is, Jesus.” 5 On hearing this, they were baptized in the name of the Lord Jesus. 6 And when Paul had laid his hands on them, the Holy Spirit came on them, and they began speaking in tongues and prophesying.

John 8:44
44 You are of your father the devil, and your will is to do your father’s desires. He was a murderer from the beginning, and does not stand in the truth, because there is no truth in him. When he lies, he speaks out of his own character, for he is a liar and the father of lies.

Ephesians 2:1-5
1 And you were dead in the trespasses and sins 2 in which you once walked, following the course of this world, following the prince of the power of the air, the spirit that is now at work in the sons of disobedience— 3 among whom we all once lived in the passions of our flesh, carrying out the desires of the body and the mind, and were by nature children of wrath, like the rest of mankind. 4 But God, being rich in mercy, because of the great love with which he loved us, 5 even when we were dead in our trespasses, made us alive together with Christ—by grace you have been saved—

Luke 3:17
17 His winnowing fork is in his hand, to clear his threshing floor and to gather the wheat into his barn, but the chaff he will burn with unquenchable fire.”

John 3:16-21
16 “For God so loved the world, that he gave his only Son, that whoever believes in him should not perish but have eternal life.  17 For God did not send his Son into the world to condemn the world, but in order that the world might be saved through him. 18 Whoever believes in him is not condemned, but whoever does not believe is condemned already, because he has not believed in the name of the only Son of God. 19 And this is the judgment: the light has come into the world, and people loved the darkness rather than the light because their works were evil. 20 For everyone who does wicked things hates the light and does not come to the light, lest his works should be exposed. 21 But whoever does what is true comes to the light, so that it may be clearly seen that his works have been carried out in God.”

Romans 8:1
1 There is therefore now no condemnation for those who are in Christ Jesus.

1 John 1:9
9 If we confess our sins, he is faithful and just to forgive us our sins and to cleanse us from all unrighteousness.

2 Peter 3:9
9 The Lord is not slow to fulfill his promise as some count slowness, but is patient toward you, not wishing that any should perish, but that all should reach repentance.

John 6:44
44 No one can come to me unless the Father who sent me draws him. And I will raise him up on the last day.

Matthew 9:37
37 Then he said to his disciples, “The harvest is plentiful, but the laborers are few;

Matthew 28:19-20
19 Go therefore and make disciples of all nations, baptizing them in the name of the Father and of the Son and of the Holy Spirit, 20 teaching them to observe all that I have commanded you.

Mark 1:15
15 and saying, “The time is fulfilled, and the kingdom of God is at hand; repent and believe in the gospel.”

John 15:13
13 Greater love has no one than this, that someone lay down his life for his friends.