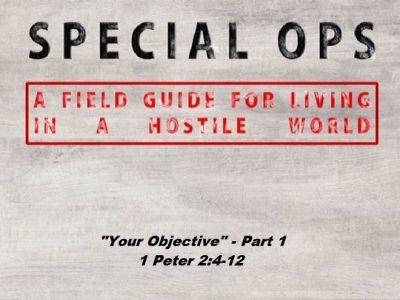 4 As you come to him, a living stone rejected by men but in the sight of God chosen and precious, 5 you yourselves like living stones are being built up as a spiritual house, to be a holy priesthood, to offer spiritual sacrifices acceptable to God through Jesus Christ. 6 For it stands in Scripture: “Behold, I am laying in Zion a stone, a cornerstone chosen and precious, whoever believes in him will not be put to shame.” 7 So the honor is for you who believe, but for those who do not believe, “The stone that the builders rejected has become the cornerstone,” 8 “A stone of stumbling, and a rock of offense.” They stumble because they disobey the word, as they were destined to do. 9 But you are a chosen race, a royal priesthood, a holy nation, a people for his own possession, that you may proclaim the excellencies of him who called you out of darkness into his marvelous light. 10 Once you were not a people, but now you are God’s people; once you had not received mercy, but now you have received mercy. 11 Beloved, I urge you as sojourners and exiles to abstain from the passions of the flesh, which wage war against your soul. 12 Keep your conduct among the Gentiles honorable, so that when they speak against you as evildoers, they may see your good deeds and glorify God on the day of visitation.

Genesis 28:16-19
16 Then Jacob awoke from his sleep and said, “Surely the Lord is in this place, and I did not know it.” 17 And he was afraid and said, “How awesome is this place! This is none other than the house of God, and this is the gate of heaven.” 18 So early in the morning Jacob took the stone that he had put under his head and set it up for a pillar and poured oil on the top of it. 19 He called the name of that place Bethel, but the name of the city was Luz at the first.

Exodus 24:4
4 And Moses wrote down all the words of the Lord. He rose early in the morning and built an altar at the foot of the mountain, and twelve pillars, according to the twelve tribes of Israel.

Matthew 21:42
42 Jesus said to them, “Have you never read in the Scriptures:  ‘The stone that the builders rejected has become the cornerstone; this was the Lord’s doing, and it is marvelous in our eyes’?

1 Kings 6:7
7 When the house was built, it was with stone prepared at the quarry, so that neither hammer nor axe nor any tool of iron was heard in the house while it was being built.